Our news alert regarding the first Annual Report on FDI Screening can be found here.

The second Annual Report on FDI Screening marks the second year of full application of the FDI Screening Regulation (which has been in force since 11 October 2020) and focuses on developments in 2021.

The United States was the top home country of foreign investor in 2021, followed by the United Kingdom. Notable anomalies to this resurgence are China and Japan, remaining below their 2020 levels. The report suggests that strict Chinese capital controls and a concentration of investment activities by Chinese investors in core industry sectors explain this trend for China.

Germany, with a share of 16.4% of all acquisitions done by foreign investors, was the top FDI destination within the EU in 2021, with a 20% increase in the number of transactions with respect to the previous year. Notable increases compared to 2020 can also be seen in Spain, France and the Netherlands, which follow Germany with a share of foreign transactions at 13.8%, 10.7% and 10.5%, respectively.

Discrepancies between, and Developments in, Member States

Although the introduction of a national screening mechanism is within the discretion of Member States and remains optional, the Commission has not hesitated to underline its importance on several occasions. Most EU Member States have since adopted a national screening mechanism or are in the process of establishing one. Bulgaria and Cyprus are currently the only exceptions. 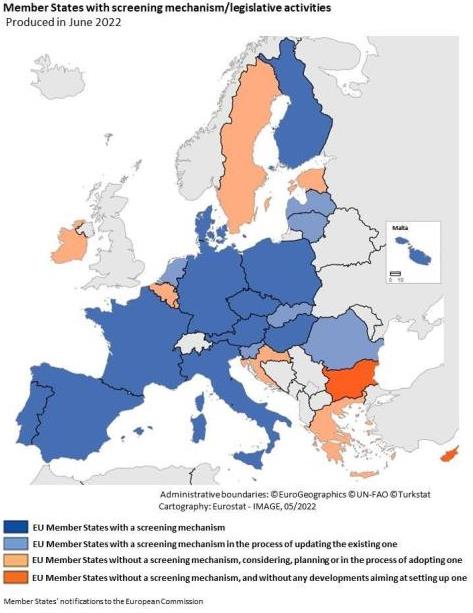 Significant divergences among EU Member States remain with regard to the requirements to initiate the formal screening of a foreign transaction, including with regard to applicable timelines, sectoral coverage and notification requirements.

Healthcare and energy are two key industries that have been severely affected by the pandemic and the global supply chain disruptions and, consequently, many EU Member States decided to intervene and establish or expand their screening mechanisms to cover these industries. As a result, in 2021, three Member States adopted a new screening mechanism, six amended their existing one and seven initiated consultative or legislative processes to establish such a mechanism. In total, two thirds of all EU Member States have an FDI screening legislation in place. Notably, Germany has added 16 new categories to its list of emerging/sensitive technologies. For further information on this topic please see our related news alerts here and here.

Key Differences from the First Annual Report on FDI Screening

Although authorisation requests are still not evenly distributed across the EU, there are timid signs of diversification since the first Annual Report on FDI Screening, when this figure was at 86.5%.

In 2021, there has been an increase in the proportion of formally screened cases (in 2020: 20%, 2021: approximately 29%). This could mean that national authorities are paying more attention as to what they consider to be potentially critical.

Future Challenges due to the Russian War of Aggression against Ukraine

In light of the far-reaching and comprehensive sanctions imposed on Russia and Belarus as a consequence of Russia’s war of aggression against Ukraine, Russian and Belarussian direct investments in the EU are more tightly scrutinised. This goes further than simply blocking investments by persons or entities that are subject to financial sanctions. Any investment related to a person or entity associated with the Russian or the Belarussian government in sensitive areas in the EU may be seen as posing a threat to security or public order in the EU and its Member States.

In this context, the European Commission issued a decision entitled Guidance to Member States on how to use FDI from Russia and Belarus in April 2022. This Guidance calls for greater vigilance towards Russian and Belarussian FDI into the EU and assistance in adhering to EU restrictive measures affecting these investments.

We see that the Regulation has now entered its consolidation phase with positive developments, despite the fact that FDI notifications create another layer of complexity to M&A deals. For example, of the 414 notifications examined, 86% could be completed in Phase 1 and only 11% went into Phase 2. However, the sharp increase of clearances subject to remedies shows that national governments are not shying away from rigorous enforcement. Merely 3% of cases led to a Commission opinion, highlighting that the focus remains on fewer cases that potentially pose a threat to security and public order.

Given the Commission’s emphasis on a national screening mechanism in all 27 Member States and on the alignment of these mechanisms, in order to safeguard the security of the EU against potentially risky foreign investments from third countries, we expect that FDI control will remain a top priority focus of the Commission.

Finally, the Commission launched a study on the FDI cooperation mechanism in 2021 with the aim of assessing the links between  screenings carried out by national authorities and the Commission, and identifying significant efficiency and/or effectiveness problems in the current system. The outcome of the study (which shall be released soon) will feed into the Commission’s evaluation of the FDI Screening Regulation planned for 2023.