25.11.2014
Care is required when carrying out capital increases at a German limited liability company (GmbH), with which new shareholders participate in the limited liability company. Attention increasing has to be give here to gift tax aspects. If the value of a new shareholder’s share received in the course of a capital increases exceeds the contribution to be made, a gift from the existing shareholders to the new shareholder which is subject to gift tax can exist. This was held by the German Federal Fiscal Court (Bundesfinanzhof – BFH) in its judgement handed down on 27 August 2014, which has just been published (II R 43/12). 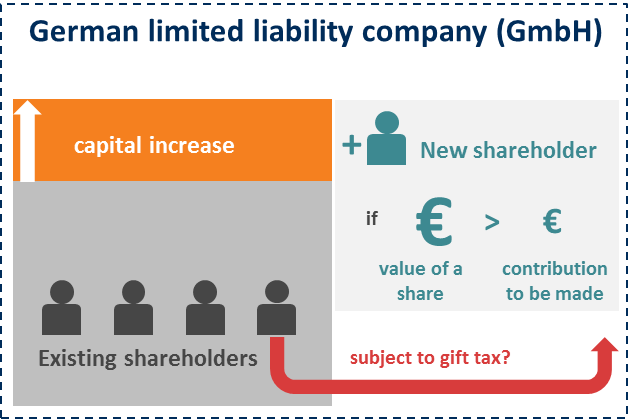 Whether the existence of a taxable gift in the context of a capital increase could have been prevented by the existence of a possible constructive dividend of an existing shareholder (= corporation) to its shareholders, was left unanswered by the German Federal Fiscal Court in its statement of the facts of the case. It hinted, however, that there was no legal basis to take foreign income tax law into consideration in German gift tax law.

The judgement, however, also has the positive message that inheritance tax relief for company assets can also be applied to such gifts in the context of a capital increase (e.g. the 85% or 100% tax exemption). In this context, the contribution constitutes a deductible acquisition expense, which can, however, only be taken into consideration to the extent that the gift of the share is liable for tax after the tax relief has been taken into account.