In its two judgements of 21 April 2015 in the cases T-359/12 and T-360/12 the General Court of the European Union had to decide on whether Louis Vuitton’s „chequerboard pattern“ may be protected as a trademark. The French company is the owner of two Community Trade Marks each showing a chequerboard pattern, one in brown and beige and one in light and dark grey. 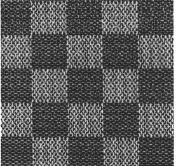 The trademarks are registered for leather goods like travel bag and purses in class 18. The German company Nanu-Nana had filed an invalidity action regarding both trademarks arguing that the trademarks lack distinctive character.

The General Court now confirmed OHIM’s decision to invalidate the trademarks in question.

The Court argued that the trademarks have no inherent distinctive character. As the marks coincide with the appearance of the products in question, the rules for distinctiveness of 3D-trademarks can be applied to the signs in question. The average consumers are not in the habit of making assumptions about the origin of products on the basis of their shape or the shape of their packaging unless they depart from the norms and customs of the sector. In the court’s view, Louis Vuitton’s chequerboard pattern is a basic and common feature which is a very popular pattern to be put on bags and other goods as classified in Class 18. Therefore the consumer will likely understand such a pattern to be decorative rather than as an indicator of commercial origin.