In the first six months of 2018, ten public offers in accordance with the German Securities Acquisition and Takeover Act (Wertpapiererwerbs- und Übernahmegesetz “WpÜG”) were approved and published by the German Federal Financial Supervisory Authority (Bundesanstalt für Finanzdienstleistungsaufsicht, “BaFin”). These offers concerned target companies representing an aggregate market capitalization at the offer price (“MCO”) of EUR 22.4 billion (H1 2017: EUR 10.3 billion). They included four mandatory, four acquisition and two takeover offers. There were no delisting offers in the first six months of 2018. 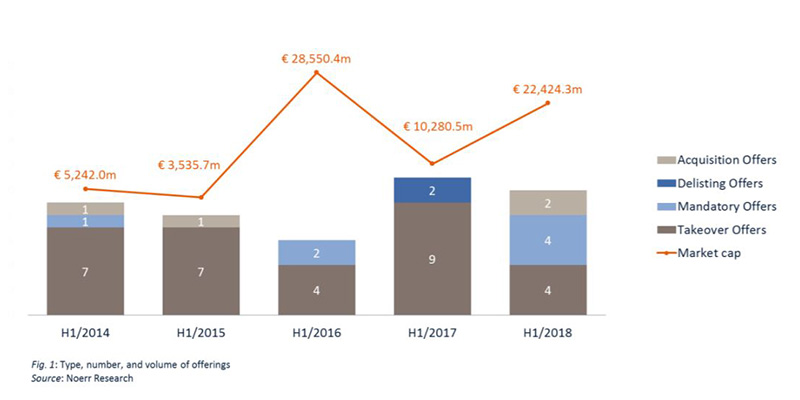 Development in the small-cap, mid-cap, and large-cap segments

Dividing the market into the segments small-cap, mid-cap, and large-cap by market capitalization of the target companies[1] results in the following picture: 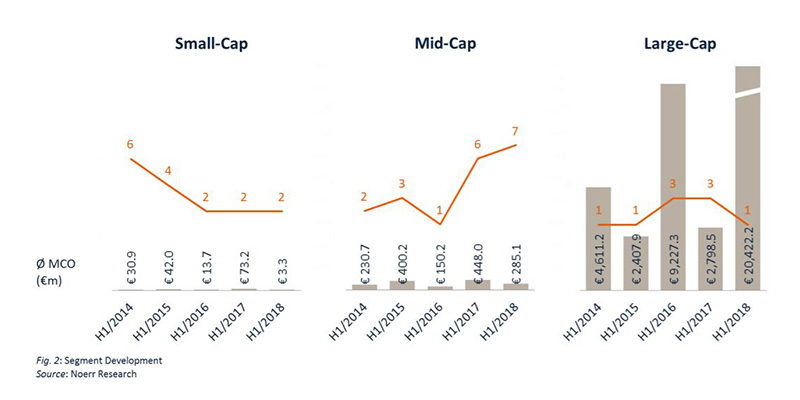 In the large-cap segment a remarkably high offer volume of EUR 20.4 billion is evident compared to the previous year’s periods, which results exclusively from E.ON Verwaltungs SE’s takeover offer to the shareholders of innogy SE. With one offer, however, the number of transactions is lower than in the same period of the previous year with three transactions. In this area – even more than in the market as a whole – a high volatility of the offer volume can thus be observed, which depends on the appearance of major transactions with an extremely high MCO.

In the mid-cap segment, both the number of transactions and the transaction volume remained relatively stable, as in the prior year periods. 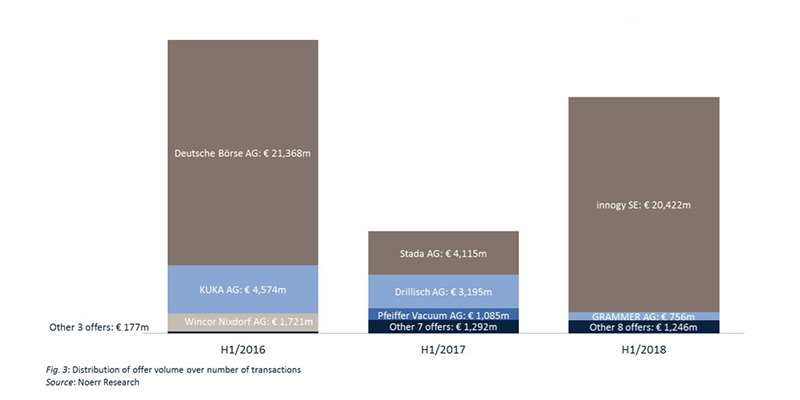 The chart below shows the premiums offered for the first half of 2018, divided into several categories. 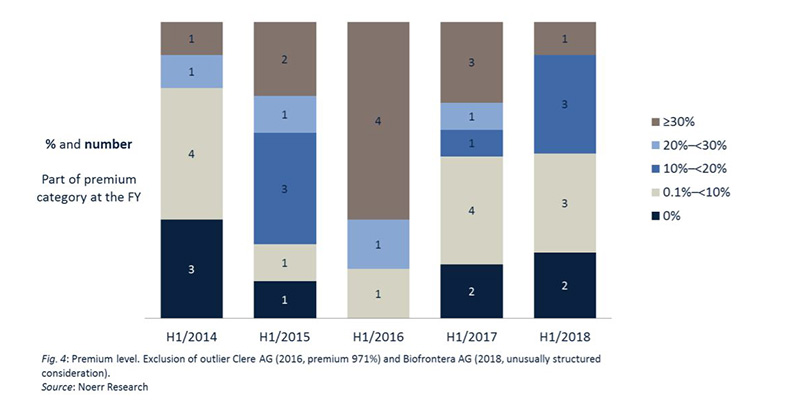 Section 15 para. 1 WpÜG authorizes BaFin to prohibit offers under the WpÜG under certain conditions. In the first half of 2018, BaFin made use of this right against Deutsche Balaton AG as bidder for an acquisition offer to the shareholders of Biofrontera AG. This case provides an opportunity to take a closer look at the practice of prohibiting public offers.

Since 2002, a total of 17 public offers were prohibited by BaFin (corresponding to around 3.28% of all announced offers). Except in 2003 and 2008, with three prohibitions each, these were spread fairly evenly over the last 16 years. In the last four years, about one offer per year was prohibited on average. The six prohibited offers since the beginning of 2012 comprised three mandatory offers, two takeover offers and one acquisition offer. [3]

Even though prohibitions of offers are rare, they still occur from time to time. The recent prohibition notices show that BaFin only prohibits offers if an offer document does not contain information specifically required under the WpÜG or the corresponding offer regulation or if its content does not comply with requirements set forth in these bodies of rules. If, in the opinion of the authority, such a case exists, it will regularly address the issue and notify the bidder in the approval process and, if necessary, may extend the time limit for the approval and draw its attention to the addition or correction of the offer document. A shortcoming of the offer document which may justify a prohibition should therefore regularly and readily be avoidable for the bidder without particular effort.

In case of prohibition, the bidder faces further consequences in addition to the prohibition of the publication of the offer document and the invalidity of the already submitted declarations of acceptance.

Firstly, in the case of prohibited acquisition or takeover offers, there is a blocking period of one year pursuant to sec. 26 para. 1 sentence 1 WpÜG. If the bidder allows the offer to be prohibited, it is therefore not possible for him to “rectify” it quickly by means of a new offer. However, this blocking period only applies to the bidder itself. For subsidiaries of the bidder and other persons acting jointly with the bidder (e.g. an affiliated company), offers are not blocked.

In case of mandatory offers, the legal consequences are more serious. The bidder is obliged to pay the target company’s shareholders’ interest in the annual amount of 5 percentage points above the base interest rate according to sec. 247 BGB (German Civil Code) for the duration of his breach of the duty to make an offer. Even more serious is the fact that the bidder and certain other parties pursuant to sec. 59 sentence 1 WpÜG are affected by a loss of rights. This primarily affects the voting rights at the annual general meeting of the target company. However, the dividend entitlement does not lapse if the offer was not intentionally omitted and the bidder makes up for it (sec. 59 sentence 2 WpÜG).

In recent years, difficulties regarding the availability of the compensation, be it shares of the bidder or cash, have formed the most frequent background for a prohibition of public offers. This conclusion is relevant to the discussions in the literature as to whether the legal consequences of a prohibition of acquisition or takeover bids for the bidder (and its group parent company) are insufficient and open up opportunities for circumvention. The practically relevant constellations in which the bidder is ultimately prevented from submitting a complete offer document by financial reasons are no cases of circumvention.

[2]     In the case of innogy SE, an offer price of EUR 36.76 per share was applied. This may increase by EUR 1.64 if the takeover offer is completed before the day on which the general meeting of innogy SE decides on the appropriation of the balance sheet profit for the business year 2018. 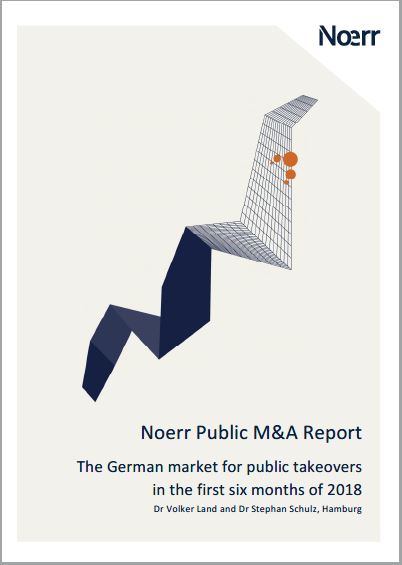 The authors Volker Land and Stephan Schulz closely examine some of the currently relevant issues for public takeovers from a legal perspective. This publication focusses on the prohibition of public offices.