In H1 2020, the German Federal Financial Supervisory Authority (Bundesanstalt für Finanzdienstleistungsaufsicht – “BaFin”) approved and published 14 public offers under the German Securities Acquisition and Takeover Act (Wertpapiererwerbs- und Übernahmegesetz – “WpÜG”). The aggregate market capitalization at offer price (“MCO”) of the companies targeted by these bids amounted to EUR 16,415.40m. Eight of the bids were takeover offers, three were mandatory offers, two were combined takeover and delisting offers and one was a pure delisting offer. Two offers were prohibited by BaFin, one because the shares offered for exchange were illiquid and the other because the bidder failed to publish the offer document within the prescribed time frame. 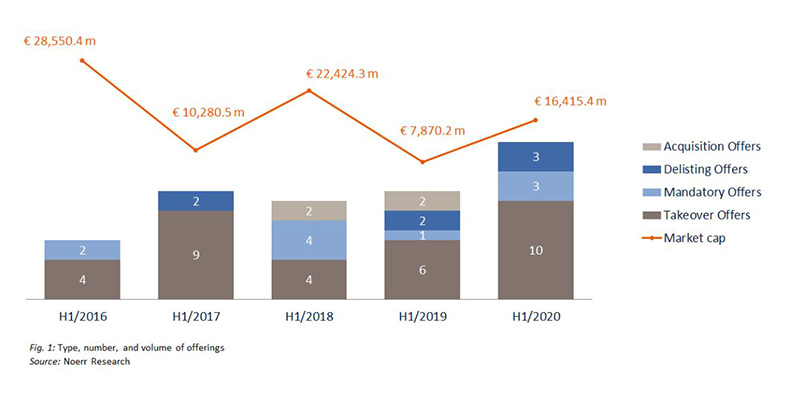 In H1 2020, the rise in total deal volume was not attributable to a single large-volume transaction, as had been the case in H1 2018 for example, but primarily to the high number of transactions in the large-cap segment as well as to the large average deal volume in the mid-cap segment.

Developments within the market segments (large-cap, mid-cap, and small-cap)

The following chart shows the development of the average MCO of all target companies divided by segment: 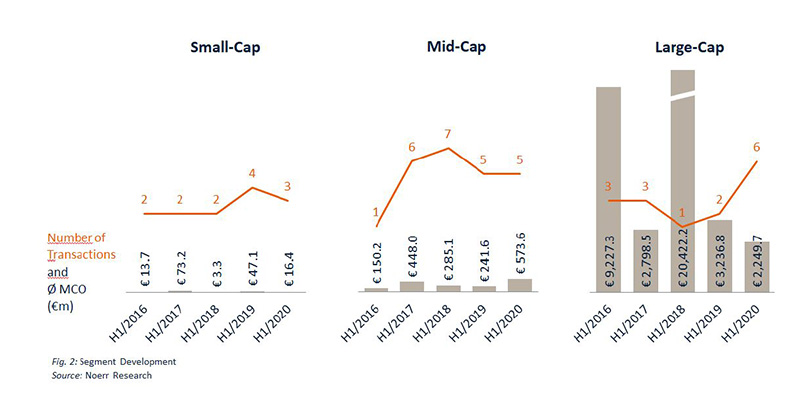 In the large-cap segment, the H1 2020 average offer volume amounted to EUR 2,249.7m. This is not only a drop in comparison with EUR 3,236.8m in H1 2019, but also the lowest average offer volume of the first half-years of each of the preceding five years. The high deal volumes of the previous H1s, however, were all attributable to individual offers with an exceptionally high volume. In H1 2018, this was the takeover offer to the shareholders of innogy SE, and in H1 2016 the exchange offer to the shareholders of Deutsche Börse AG. On the other hand, the number of six transactions in the large-cap segment in H1 2020 significantly surpasses the number of transactions in each first half year from 2016 to 2019 respectively.

In the mid-cap segment, there were five transactions with an average offer volume of EUR 573.6m in H1 2020. This is a level similar to H1 2019 in terms of transaction numbers. The average offer volume, however, has more than doubled year-on-year and is, in fact, also higher than in the first six months of the preceding years.

The number of transactions in the small-cap segment remains stable at three transactions in H1 2020. At EUR 16.39m, the average offer volume of H1 2020 is considerably lower than that of H1 2019.

Distribution of deal volume vs. number of transaction

The offer with the largest MCO was the delisting offer by Traviata B.V., an acquisition vehicle of KKR, to the shareholders of Axel Springer SE, representing a share of 41.41% of the total volume. The other five offers in the large-cap segment accounted only for shares of be-tween 6.65% and 10.83% of the total volume. Even though the effect is not as pronounced as it was in the two preceding H1 periods, it can still be said that H1 2020 saw the recurrence of an uneven spread of offer volume across the total number of transactions. 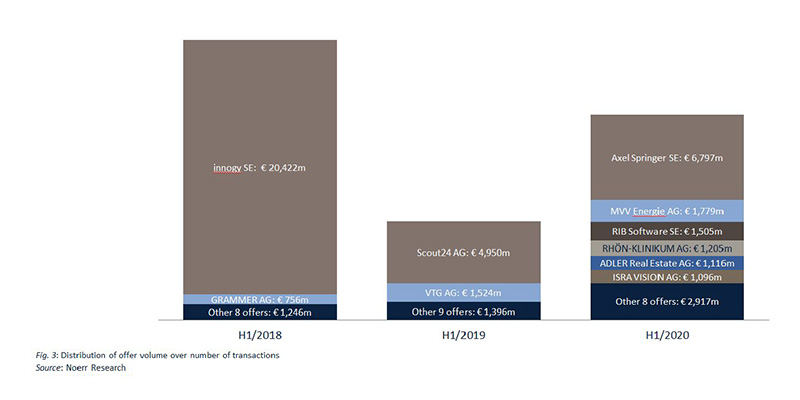 
In the first half of 2020, bidders paid an average premium of 14.99% on the volumeweighted average price of the respective target company‘s shares in the three-month period preceding the announcement of the bid (“3-month VWAP”). The highest premium of 39.19% was paid to the shareholders of ADLER Real Estate Aktiengesellschaft on the takeover bid by ADO Properties S.A., a deal structured in the form of an exchange offer against shares in the bidder. In four cases, the shareholders of the target companies did n 6 month VWAP. Instead, a company valuation was carried out in order to calculate the applicable minimum price in accordance with section 5 para. 4 WpÜG Offer Regulation.

The following chart illustrates, for the transactions of the first six months of the years 2016 to 2020, the premiums paid either on the 3-month VWAP or, alternatively, on the company value determined by a valuator, subdivided into percentage ranges: 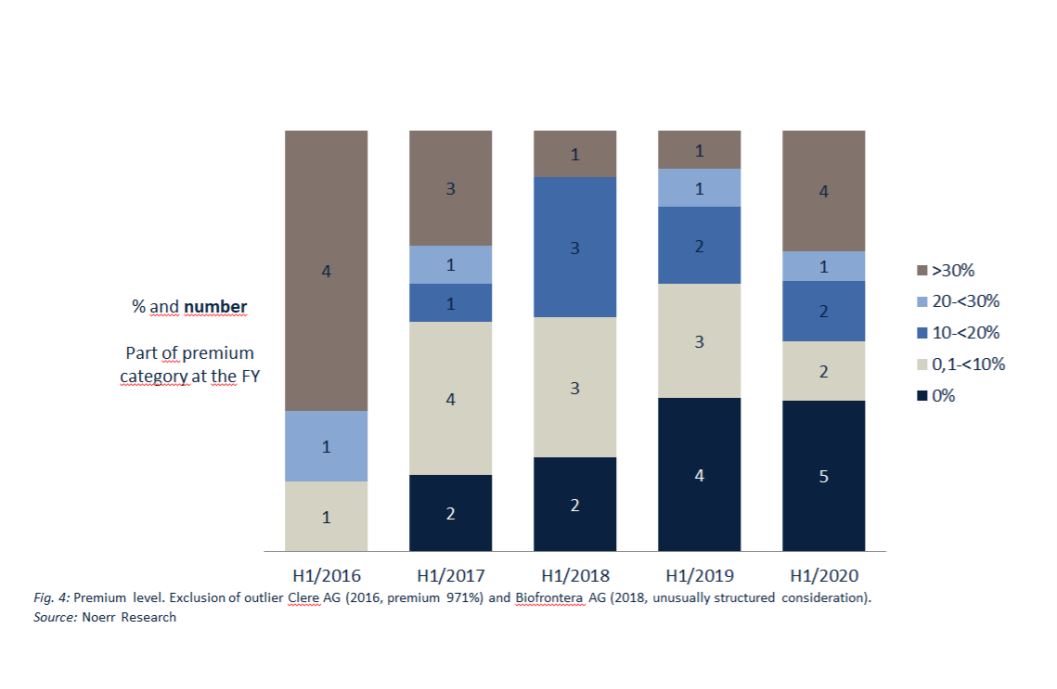 The following chart summarises how the offers made in H1 2020 were evaluated by the corporate bodies of the target companies: 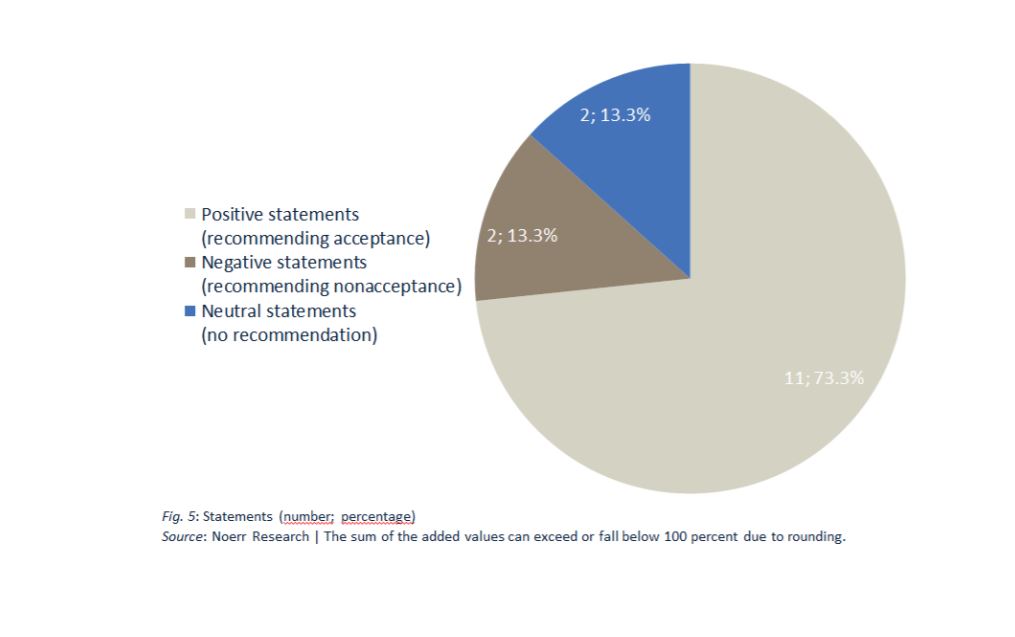 11 (approx. 73.3%) of the 15 reasoned statements of H1 2020 had been based on socalled fairness opinions – expert opinions obtained from external consultants assessing the adequacy of the offered compensation. In three cases (approx. 20%), the corporate bodies of the target company obtained two fairness opinions. All of these cases (target companies: ADLER Real Estate AG; RIB Software SE; QIAGEN N.V.) were takeover offers in the large-cap segment, so the target companies had an MCO of more than EUR 1bn (for more on this kind of practice, see Public M&A Report FY 2019).

Of particular interest is the question to what extent the public takeover market has been affected by the Covid-19 pandemic. Naturally, this question cannot be answered conclusively yet, as the crisis is by no means over. However, the data now available for the first half of 2020 allow us to draw some preliminary conclusions, which we set out below in further detail, focusing in particular on how the crisis influenced the number of newly initiated bids and what impact it had on the transactions already in progress.

Prima facie, the rise in the number of published offer documents compared to the corresponding previous-year period (see above) would imply an increase in market activity. Any interpretation of this number should however bear in mind that there is usually a considerable time lag (40.1 days on average in H1 2020) between the public announcement of a decision to launch an offer to the shareholders of a listed company or to take control of such a company pursuant to section 10 WpÜG (“Section 10 Announcement”) and the publication of the offer document itself. More meaningful in this context is the number and distribution of Section 10 Announcements. In H1 2020, 16 such announcements were made, spread across the months as follows: 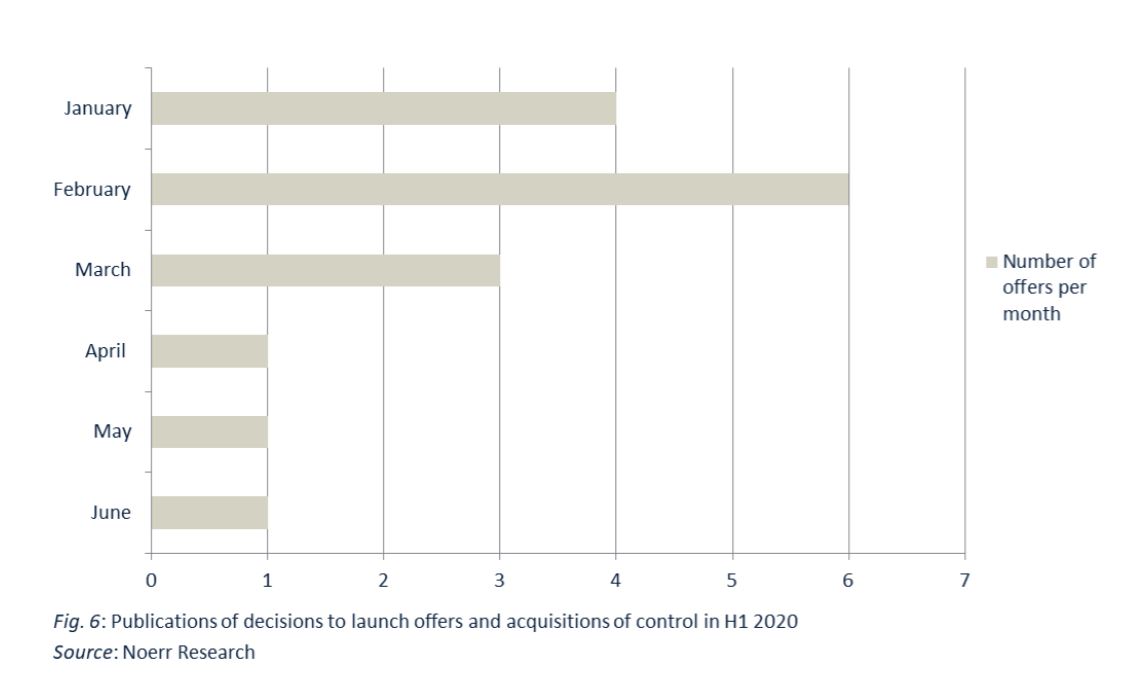 The above chart shows that 12 of the Section 10 Announcements during the period under review were made before the German benchmark index DAX closed at its long-time low of 8,441.40 points on March 18, 2020. In April, May, and June, only one announcement was 9 made per month, far below the long-term average of three announcements per month (for detailed analysis, see Noerr Public M&A Report H1 2019). Clearly, investors have immediately become more reluctant to initiate transactions in the public takeover market as a consequence of the Covid-19 pandemic.

It is also worthwhile to examine the transactions that were already in progress when the crisis reached its peak, i.e. such transactions for which the Section 10 Announcement had already been made on March 18, 2020. There is, for example, the question if the stock market crash and the economic downturn caused by the Covid-19 pandemic have caused transactions to be terminated. From a takeover law perspective, it is necessary to distinguish between the phases before and after the publication of the offer document by BaFin when considering the options for terminating a transaction.

Before publication of the offer document

For the phase between the Section 10 Announcement and the publication of the offer document, the law does not provide the bidder with any possibility to terminate the bidding process without sanction. A conditional Section 10 Announcement is generally regarded as inadmissible. Pursuant to sec. 14 para. 1 sentence 1 WpÜG, the publication of a Section 10 Announcement establishes the bidder’s obligation to submit an offer document to BaFin. If this obligation is not fulfilled or if the offer document submitted is incomplete or fails to comply with the relevant laws, the supervisory authority will prohibit the offer in accordance with sec. 15 para. 1 WpÜG. Such prohibition will result in a 1-year blocking period being imposed on the bidder as well as on certain other persons pursuant to sec. 26 para. 1 WpÜG. During the blocking period, any further bid is inadmissible. A bidder who fails to fulfill the obligation to submit an offer document that complies with the law will realistically not be able to avoid the above mentioned legal consequences.

Two public offers were prohibited by BaFin in the period under review. This figure should, however, be regarded as part of the long-term trend, according to which the average number of offers prohibited by BaFin is a little over one (see Noerr Public M&A Report H1 2018). Against this background, the number of offers prohibited has not risen dramatically in H1 2020. An analysis of prohibition orders published by BaFin indicates that the Covid-19 pandemic probably did not play a role in either of the two above mentioned cases. In particular were the respective decisions not only made before the lockdown was imposed, i.e. on January 15, 2020 (Travel24.com AG) and on March 6, 2020 (Biofrontera AG), but the circumstances on which these decisions were based arose even earlier.

After publication of the offer document

Once an offer document is published, the bidder is basically bound to the offer, which can only be withdrawn under special circumstances. A drop in the share price of the target company or a general drop in share prices, a deterioration of the target’s economic outlook or a general economic downturn are all not accepted as justifications for the bidder to withdraw from the offer. The legal situation may, however, be different if the bidder has based the offer on a closing condition which is jeopardised by any of the above mentioned scenarios.

So-called MAC clauses (material adverse change clauses) can be of particular relevance in this context. MAC clauses allow a bidder to refrain from executing an offer should significant adverse circumstances regarding the target company occur or become known during the acceptance period. MAC clauses may refer to changes to the situation of the target company itself (so-called Business MAC or Company MAC, e.g. occurrence of events that affect certain key financial figures of the target company). They may also refer to changes to the markets in which the target company operates (so-called Market MAC, e.g. decline of the DAX or another relevant index by a certain amount). According to prevailing opinion, and to BaFin in particular, such clauses can only apply if further requirements are fulfilled, considering the fact that the WpÜG generally limits the permissibility of conditions.

Although MAC clauses are generally considered to be of particular significance with respect to the repercussions of the Covid-19 pandemic (see also Noerr’s client briefing PublicTakeovers during the COVID-19 Pandemic, no cases could so far be identified within the context of the Covid-19 pandemic in which bidders stepped back from their offer due to an MAC clause.3 Having said that, only one of the offers in question actually included an MAC proviso (offer by Quebec B.V., a 100% direct subsidiary of Thermo Fisher Scientific Inc., to the shareholders of QIAGEN N.V.).

As in many other areas of society, the uncertainty created by the Covid-19 pandemic has had a major impact on the activity in the market for public takeovers. The decline in the number of new transactions since March 2020 should be interpreted in this context. On the other hand, the pandemic has neither had an impact on the transactions that were published before the peak of the crisis nor on the offers that were announced since. The latter finding gives cause for optimism as it shows that the goal of the legislator of laying the groundworks for a stable and binding takeover process was reached even during a major crisis of historic proportions.