Number and volume of offers

During the first six months of 2017 as shown in the graph below, eleven public offers under the German Securities Acquisition and Takeover Act (Wertpapiererwerbs- und Übernahmegesetz; “WpÜG”) were approved by the German Federal Financial Services Supervision Authority (Bundesanstalt für Finanzdienstleistungsaufsicht; “BaFin”) and published, representing an aggregate market capitalization at the offer price of EUR 10.3 billion (H1 2016: EUR 28.6 billion)*. These offers comprised nine takeover offers and two delisting offers. There were no mandatory offers or acquisition offers. In comparison to the preceding years, the market for public takeovers shows an increase in activity in terms of deal numbers in the first six months of 2017.

* Excluding the first takeover offer to shareholders of Pfeiffer Vacuum Technology AG which was not completed.

In general, the public M&A market is characterized by an uneven distribution of offer volumes over the number of transactions: A small number of the target companies represent very high market capitalizations, but the larger number of target companies has a relatively low market value.

** Excluding offers regarding target companies for which it was not possible for BaFin to determine the 3-month-VWAP as per announcement.

Compared to the first six months of 2016, the market showed a decrease in premiums offered to target company shareholders. The average premium offered on the 3-month-VWAP of the shares of the target companies at announcement was 21.08% (H1 2016: 23.96% ).

The diagram below shows a breakdown of the premiums offered in the first six months of 2017 into several classes:

The breakdown shows that, in general, the number of offers which provide for premiums in the ranges from 10% to 30% is lower than that of the other categories. The offers in the lower two categories can be characterized as offers which most likely do not aim at the immediate acquisition of a maximum of shares. If such acquisition is intended, premiums will tend to be significant, in many case above 20%.

In more general terms, the German market of the last six months showed the following features:


It is difficult to assess if the low number of public offers initiated and published by foreign investors during the first six months of 2017 can be attributed to a change in political climate. At least from our perception of the market, international investors considering an offer for a listed company show more interest in the restrictions under German foreign trade law (Außenwirtschaftsrecht). Under these rules, the Federal Ministry of Economics and Energy may prohibit a transaction in which an investor from a country outside the European Union and EFTA can acquire a stake in a company of more than 25% of the voting rights if such prohibition is necessary to ensure the public order or security of the Federal Republic of Germany. These rights apply regardless of the industry in which the target company operates; for certain industries (e.g. defense, IT security), the ministry has more far-reaching rights. The bidder has the right to apply to Federal Ministry of Economics and Energy for a clearance certificate.

The increased awareness for the risks of the prohibition of public offers was caused by the recent prominent cases of Aixtron, KUKA and Osram in which a prohibition was discussed, and in the Aixtron case a clearance was withdrawn after it had initially been granted. A review of the recent offer documents published by bidders controlled by ultimate shareholders from the relevant jurisdictions shows that some bidders make use of their right to obtain a clearance certificate before the offer was announced, others refrain from doing it. However, investors also make the experience in recent times that the administrative process to obtain a clearance certificate has become more complex and burdensome (for an analysis of the current situation as well the contemplated revision of the German rules, please revert to the article written by Noerr’s foreign trade specialists Bärbel Sachs and Johannes Schäffer).


The first six months of 2017 showed two more delisting offers being published (representing a total of 18.18% of the total number of public offers in the first six months of 2017). Delisting offers were introduced in Germany by an amendment to the German Stock Exchange Act (Börsengesetz) in November 2015. Before that time, it was possible to delist a company from the regulated markets of the German stock exchanges without a right of the shareholders to sell their shares. This practice was based on a judgement of the German Federal Court of Justice of October 2013 in which it turned over its own more restrictive judicature.

Under the new legislation, unless certain exemptions apply (e.g. in case of secondary listings), the stock exchange will only approve an application by the company for a delisting of its shares from the regulated market if a delisting offer to all shareholders has been published. In general, delisting offers follow the rules of the WpÜG. However, in certain aspects, these rules are modified, mainly the minimum offer price being equal to the weighted average domestic price of the target company’s shares during the last six months before the formal announcement of the decision to make the offer. For takeover and mandatory offers under the WpÜG, in comparison, the relevant period is three months.

The first delisting offer made and completed under the new regime was Lone Star’s offer to the shareholders of ISARIA Wohnbau AG in July 2016 (for details of Noerr’s role in this transaction as advisor to the target please revert to Link) and since then four more delisting offers were made. This empirical basis allows first comments on the typical features of delisting offers.


Potential bidders often ask how they can protect themselves from defense measures of the target company (e.g. capital increases or granting of high dividends). One way of achieving this is entering into a business combination agreement under which the target company agrees to support the offer. However, if such agreement cannot be reached, the only way for the bidder to limit its exposure to defense measures is to include in the offer conditions precedent for its implementation.

In principle, the WpÜG permits conditional offers provided that the conditions are of such a nature that neither the bidder, persons acting jointly with the bidder nor their respective affiliates or advisors acting for these parties can cause them to be fulfilled alone. Stricter rules apply for mandatory or delisting offers in which conditions are prohibited, unless required by law (e.g. anti-trust clearance). If an offer is subject to conditions, these conditions must be worded in a way that their fulfilment or non-fulfilment can be assessed objectively and with certainty without influence of the bidder. In case such assessment calls for a judgement (e.g. financial effects on the target company), it is common practice accepted by BaFin to have an independent third party (usually an auditing firm) make the assessment whether the conditions are met.

Deciding which offer conditions to include and finding a proper wording for the offer conditions can be a difficult task, in particular regarding defense measures. The bidder faces two risks:

The analysis which conditions are to be included in an offer document and how they should be worded is determined by the aims and the level of risk-aversion of the bidder on the one side and an assessment of the potential of the target company to successfully implement defense measures on the other side. 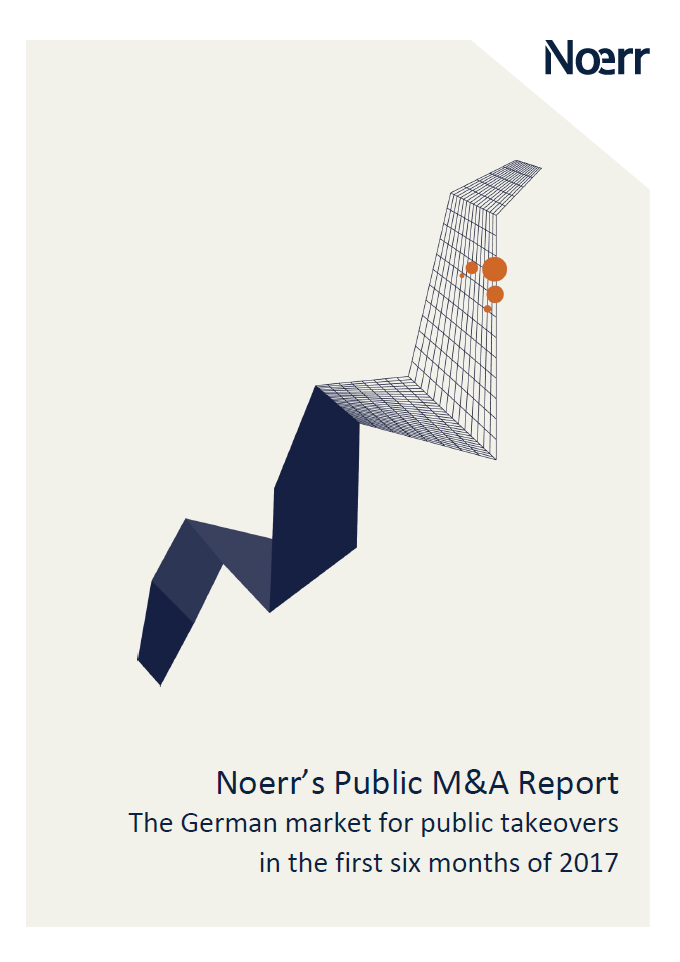 The authors Volker Land and Stephan Schulz also closely examine some of the currently relevant issues for public takeovers from a legal perspective. Export regulation, delisting offers and the protection of potential bidders from defence measures by the target company are of particular interest.