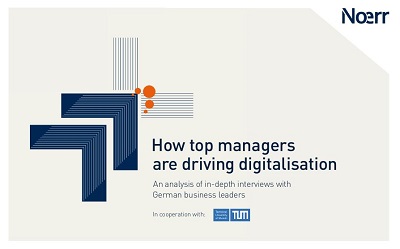 Preventing digital disruption is the most important motivating factor for companies to move forward on digitalisation. This became clear in in-depth interviews with the CEOs and supervisory board chairs of DAX-listed and other large companies conducted by Noerr in cooperation with the Technical University of Munich. While businesses are working towards the strategic goal of digitalisation developing naturally from their own operations, they are also using M&A transactions to support this process by bringing in companies with expertise in digital technologies. The study also found that CEOs and managers play a decisive role in whether digitalisation efforts are successful. The results were analysed and published in the whitepaper “How top managers are driving digitalisation”.

The survey shows that the CEOs and supervisory board chairs interviewed are on the same page when it comes to their motives for digitalisation. Noerr partner Gerald Reger summarises the results by saying, “Large German companies are taking a needs-based approach. The strongest motivator is preventing digital disruptions, although some business models are much more vulnerable than others. Our interviewees see the challenge as keeping their companies up to date without always chasing the latest trend.”

The CEOs interviewed place the responsibility for digitalisation primarily at the top management level. They believe that digitalisation can only be successful if it is credibly promoted from the top down. “At the same time, the CEOs emphasise the need to support decentralisation and employees’ initiative,” Mr Reger explains.

The top managers also stress the importance of hiring talented experts with digital knowledge and skills because they believe that digitalisation flows naturally from a company’s business operations. On the other hand, they are sceptical about acquiring other companies as a means of promoting digital transformation. While managers believe that M&As alone do not enable companies to take major leaps towards digitalisation, they also think that, because acquisitions can function as catalysts for digitalisation, they are an important element in the digitalisation roadmap.

“Seen from this perspective, the primary benefit of M&As is to acquire digital knowhow,” continues Gerald Reger. This is why those interviewed emphasise that an M&A target’s digital maturity is key. They believe that it is only justifiable for a large company to initiate a takeover if the target has a technological edge in terms of digitalisation. Mr Reger concludes that, “The CEOs we interviewed do not tend to view large companies as developers of digital technologies, but rather as implementers of them.”

Digital M&A transactions pose great challenges to large companies. They have to make sure the target’s drive and innovative energy are not lost within the acquiring group. “To ensure this, it is critical for the target company’s top talent to remain on board,” says Mr Reger, referring to the results of last year’s Noerr study called “A blueprint for digitalisation”, for which 150 company experts were interviewed. The study showed that successful transactions saw only 2% of employees leaving the company during the integration phase, whereas in less successful transactions around 11% left.

The CEOs taking part in the present in-depth interviews also state that key employees of the target should be retained, at least on a medium-term basis. They believe that, along with the technology, these employees are the only assets contributed by the acquired company. They argue that good retention management, not only of employees but also of managers, is the key to success.

A question of strategy: choosing the right form of participation

Whether a buyer should aim to acquire a minority or majority share in a target company is a question of business strategy. If the goal is to expand the buyer organisation’s portfolio or improve technological knowledge and skills, majority takeovers are the method of choice. According to the CEOs, minority interests make sense when the goal is to be able to leverage the position of shareholder to contribute ideas and momentum to the target or ensure that the target does not disappear from the market.

The survey respondents agree that digitalisation now permeates all areas of a business and has progressed significantly in customer-related applications, but that much more progress is still needed in back-end systems. They also say that AI-based applications to optimise businesses processes will become much more important in both areas.

The in-depth interviews with CEOs and supervisory board chairs of DAX-listed companies and other large companies complement the results of the study entitled “A blueprint for digitalisation” that Noerr and the Technical University of Munich presented last year. The study showed that a clear digital strategy is the most important ingredient in successfully digitalising a company’s operations. Of the 150 decision-makers surveyed, 71% also stat-ed that M&A transactions with a digital component played a key role in that strategy. The findings gained from this year’s in-depth interviews now provide a more nuanced view of the factors that help companies to successfully move forward with digitalising.