Three years after its reform, German insolvency law has received top marks from restructuring and insolvency experts, while non-German  experts’ are more critical. These are the key findings of the “Insolvency Study 2015” conducted by Noerr and McKinsey & Company. 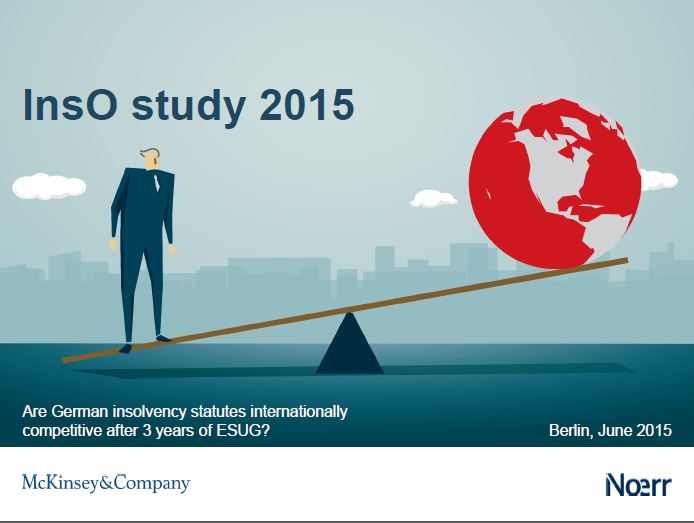 How popular is the new German insolvency law in practice? To answer this question, the law firm Noerr and the consultancy firm McKinsey & Company surveyed restructuring and insolvency experts, including lawyers, judges, insolvency administrators, creditors and investors. 220 experts replied.

Three years ago, German insolvency law was modernised by the “Act to Facilitate Corporate Restructuring” (Gesetz zur Erleichterung der Sanierung von Unternehmen) (the “Act”). The legislator’s aim was to improve the possibility of companies threatened with insolvency being restructured, and also raise the profile of German insolvency law versus foreign jurisdictions; in international insolvency cases companies often have the option to select the country where they wish to conduct the insolvency proceedings.

The key results of McKinsey and Noerr’s analysis are:

Not yet fully competitive at an international level

On the other hand, the non-German experts questioned are more critical. Only six per cent prefer the German regime, with a clear majority of 74 per cent tending towards common law jurisdictions.

“It is not only non-German experts who believe that the instruments of the German insolvency law are not differentiated enough,” says Noerr partner Dr. Thomas Hoffmann, co-head of the firm’s Restructuring and Insolvency practice group. The negative aspects criticised by many experts include the continued absence of a group insolvency law (71 per cent), the fact that German appeal law is often detrimental to restructurings (70 per cent) as well as the absence of pre-insolvency restructuring proceedings allowing a limitation to individual creditor groups (54 per cent). “The fact that restructuring against the individual creditors’ will is possible in Germany only in a full insolvency procedure is regarded as a true obstacle,” says Hoffmann.

McKinsey restructuring partner Klaus Kremers believes that the flight into foreign jurisdictions is going on: “Since the number of corporate insolvencies has been declining since 2010, the litmus test of a massive wave of bankruptcies is still outstanding.” According to Kremers, there is a need for action now: “With complex financial restructurings, the Scheme of Arrangement is often preferred, such as in the case of the restructuring of the car park operator Apcoa. The legislator could take the pressure off by facilitating the restructuring with only some creditor groups.”

Faster restructuring and improved opportunities for creditors to exert influence

Overall, the survey shows a high degree of satisfaction with the new insolvency law. 92 per cent of those surveyed believe that the Act has made German restructuring law more attractive. Two thirds state that the restructuring process within the protective shield and subsequent insolvency proceedings is fast. 80 per cent have observed that the proceedings are completed within a reasonable period of 7 to 12 months on average.

In addition to the reasonable planning reliability of the proceedings, experts particularly value the improved possibilities for creditors to exert influence. 81 per cent state that shareholders are not placed at an undue advantage due to interventions in the insolvency plan, such as by a debt/equity swap. 83 per cent says that the creditors’ willingness to support the restructuring has increased as a result of improved possibilities to participate in the creditors’ committee. Kremers: “82 per cent have noticed that the creditors’ committees are increasingly acting more professionally, which corresponds to what we are experiencing.” 62 per cent of the experts advocate a further expansion of the rights of the preliminary creditors’ committee.

However, the improvements of the Act have also led to a higher complexity of proceedings (80 per cent believe this to be the case) and higher costs (63 per cent).

Whilst the study confirms that German restructuring law is headed in the right direction, in order to convince international creditors and investors of its benefits, further action is still desirable, especially the introduction of an isolated pre-insolvency group creditor procedure.

The legislator will evaluate the new regulations in two years and, according to Thomas Hoffmann, could use this opportunity to consider yet another aspect - 84 per cent of the non-German experts questioned and 41 per cent of those surveyed in Germany are in favour of introducing English as an additional court language in German insolvency proceedings involving a large international group of creditors.