In 2020, the German Federal Financial Supervisory Authority (Bundesanstalt für Finanzdienstleistungsaufsicht – “BaFin”) approved 23 public offers pursuant to the German Securities Acquisition and Takeover Act (Wertpapiererwerbs- und Übernahmegesetz – “WpÜG”). The aggregate market capitalisation at offer price (“MCO”) of the companies targeted by these offers amounted to EUR 36.0 bn. 15 of the offers were takeover offers, five were mandatory offers and three were delisting offers. BaFin prohibited two offers because the bidders failed to publish the offer document within the prescribed time frame and a further one, an exchange offer, because the shares offered for exchange were illiquid.

Developments within the market segments (large-cap, mid-cap, and small-cap)

The following chart shows the development of the average MCO in the individual segments:

10 public offers fell into the large-cap category, making this segment the strongest in 2020 in terms of quantity. Already in 2019, the number of high-volume transactions was remarkable (10 large-cap, but also 11 mid-cap transactions out of a total of 28), and this trend continued in 2020.

Distribution of deal volume vs. number of transaction


The large-cap segment’s 10 offers with an aggregate volume of EUR 32.8 bn accounted for approx. 91% of the corresponding value of EUR 36.0 bn in 2020. As in previous years, a major share of the aggregate offer volume came from large-cap transactions. Like 2019 however, 2020 saw not just one or two extremely high-volume large-cap offers, but a variety of them of similar volume instead. So, in contrast to 2018 and 2017, the aggregate offer volume in 2020 was not mainly influenced by just a few transactions with extraordinary high volumes.

The following chart illustrates the share of the large-cap transactions of 2019 and 2020 in the respective year’s annual aggregate offer volume (expressed as MCO): 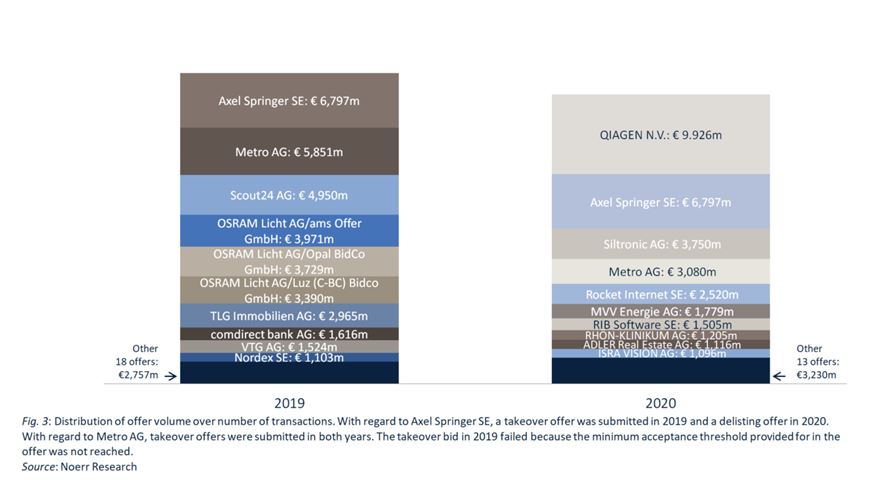 Six offers in 2020 were in the highest premium category of more than 30%, while only two offers fell into this category in 2019. The total number of all offers involving premiums of more than 20%, in contrast, decreased significantly from 11 in 2019 to seven in 2020. Nevertheless, the average premium was only slightly lower than in 2019, when it amounted to 16.15%.

The following chart summarises how the offers were evaluated by the corporate bodies of the target companies: 14 of the 23 reasoned statements (approx. 60.87%) were based on so-called fairness opinions – expert opinions obtained from external consultants assessing the adequacy of the offered compensation. In four cases (approx. 17.39%), the corporate bodies of the target companies obtained two fairness opinions. All of these cases (targets: ADLER Real Estate AG, RIB Software SE, QUIAGEN N.V., RHÖN-KLINIKUM Aktiengesellschaft) were takeover offers in the large-cap segment, so the target companies had an MCO of more than EUR 1 bn (for more context on such practice see Noerr Public M&A Report 01/2020).


Reasoned statements by the management board and the supervisory board of the target company regarding public offers pursuant to WpÜG must, according to section 27 para. 3 WpÜG, be published “without undue delay” after the offer document was submitted. The higher regional court (Oberlandesgericht) Frankfurt am Main ruled on December 8, 2005 (file number: WpÜG 1/05 OWi) that to determine what “without undue delay” means, the specific circumstances for each individual case would have to be considered. According to the court, in view of the need for speed, which has to be considered in the entire takeover procedure, a period of two weeks must not be exceeded as a rule. In fairly straightforward or particularly urgent cases, a shorter deadline might also be considered. A publication of the statement more than two weeks after the offer document was submitted, however, could generally not be regarded as published without undue delay and can only be accepted in rare exceptional cases with very special circumstances and difficulties, the court stated. For the case in question, the court considered a period of 10 days as “just about acceptable”. In this context, the higher regional court took into account that in the underlying case it was difficult to provide information due to certain members of the supervisory board being on vacation and needing a translation, that there were differing assessments on the takeover offer and that there was a need for additional discussions in view of the increase of the share price immediately after the offer was published. Further difficulties had arisen from a parallel occurring insolvency crisis of an affiliated group company whose implications for the takeover had to be considered and from the fact that two members of the target company’s supervisory board were also members of the affiliated company’s corporate bodies and were therefore very busy.

BaFin agreed with the court’s legal interpretation and specified that a period of less than two weeks could be considered if the bidder and the target company intended to perform a corporate merger and were therefore, for example, already cooperating with each other within the scope of a business combination agreement. In such cases, the corporate bodies of the target company would be sufficiently aware of the circumstances on which they need to submit their reasoned statement even before the bidder had submitted the offer document. According to BaFin, obtaining a fairness opinion should also have no influence on the interval either. In addition, both the management board and the supervisory board would be obliged to make sure that their respective statements are published in a timely manner. This should also apply if the management board and the supervisory board publish a joint statement, as is common practice.

German partnerships limited by shares as targets for public takeovers


German partnerships limited by shares (Kommanditgesellschaften auf Aktien, “KGaA”) do usually not play a major role in takeover law (Among the offer documents published by BaFin on its website, there is only one that is directed at the limited partners of a KGaA (Offer of AIG Century GmbH & Co. KGaA to the shareholders of AIRE GmbH & Co. KGaA dated June 12, 2012)). On one hand, this is due to the fact that, in Germany, the absolute number of publicly listed KGaAs is significantly lower than the absolute number of publicly listed stock corporations (Aktiengesellschaften, “AG”) or European Stock Corporations (Societates Europaea, “SE”). On the other hand, this particular legal form in its typical shape of a “limited liability company & Co. KGaA (Kapitalgesellschaft & Co. KGaA)” is almost “takeover resistant”. While the majority shareholder of an AG may, at the general meeting, initiate the dismissal or election of individual supervisory board members and thus influence the composition of the management board, the purchaser of the majority of the limited shares in a KGaA is not legally entitled to do so. The authority to manage a KGaA is with its general partner, and who manages the business of the general partner is decided by its majority shareholder with the appointment of the members of its management body. The resulting lack of influence by the bidder causes the KGaA to be an unattractive target for any
takeover attempt.

The rarity of the KGaA being a target company in takeover situations in turn means that BaFin decisions on legal issues relating to this legal form deserve special attention. This also applies to the eight decisions published by BaFin on November 26, 2020 on the exemption of shareholders from the obligation to publish and submit a mandatory offer to the limited shareholders of Ströer SE & Co. KGaA (“Ströer KGaA”). This related to a restructuring and transfer of shares among certain limited shareholders of Ströer KGaA. In this context, the involved parties concluded a voting pool agreement under which they undertook to exercise their voting rights at the general meeting only in accordance with the resolutions of a pool meeting. BaFin granted the requested exemptions and followed its previous administrative practice and the prevailing opinion in the literature on takeover law in the published reasons.

At first, BaFin states that the conclusion of a voting pool agreement, as it was concluded in the case of Ströer KGaA, constitutes control within the meaning of section 29 para. 2 sentence 1 WpÜG. In this context, BaFin assumes that the conclusion of the agreement would establish an “acting in concert” within the meaning of section 30 para. 2 WpÜG between the parties, which would lead to a mutual attribution of their voting rights. Due to this attribution, the parties exceeded the control threshold of 30% of the voting rights pursuant to section 29 para. 2 sentence 1 WpÜG. BaFin clarifies that, in accordance with its established administrative practice, it would not be relevant for the attribution whether the respective contracting party could bring about decisions by the pool. The conclusion of a voting pool agreement alone would already be sufficient, because the parties could be perceived as “a block” from the perspective of the external shareholders.

The aforementioned fact that limited shareholders have a weak legal position compared to the shareholders of an AG because of their lack of influence on the composition of the management body, is not mentioned by BaFin in the context of determining if an acquisition of control has taken place. Instead, BaFin clarifies with reference to section 2 para. 3 no. 1 WpÜG that section 29 WpÜG would, without exception, also apply to KGaAs.

Finally, BaFin bases the granted exemption from the obligation to submit a mandatory offer on section 37 para. 1 var. 4 WpÜG (lack of an “actual possibility of exercising control”). Only in this context, BaFin refers to the limited shareholders’ reduced possibilities of exerting influence and the continuing “material control situation” by the general partner, whose control situation had not changed by the restructuring in question. In this context, BaFin states that the corporate governance structure of a KGaA regularly justifies the granting of an exemption.

The practical implications of BaFin’s decision are that, when shares in a publicly listed KGaA are acquired or a voting pool agreement is concluded, the possible obligation to submit a mandatory offer must be taken into account. KGaAs are by no means excluded from the scope of the WpÜG. BaFin assumes, however, that an exemption from the obligation to submit an offer can regularly be granted in case of an acquisition of control over a typically structured KGaA. Nevertheless, in order to avoid surprises in corresponding transactions, BaFin should be involved at an early stage of the transaction.

Sections for which the author has not been specifically identified were contributed by the editors. The editors would like to thank Juri Stremel, Noerr Partnerschaftsgesellschaft mbB, Hamburg, for his support with the editorial preparation of the Noerr Public M&A Report.